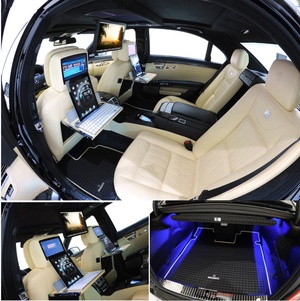 The conversion of the rather staid Mercedes-Benz S-Class into the Brabus “iBusiness 2.0” begins in the boot, with a Mac Mini mounted in a leather-lined tray inside the trunk. The Mac connects up with a 15.2-inch TFT, 16:9 aspect ratio display that mechanically unfolds from the alcantara-coated headliner and can also be used as an auxiliary display for the – not one, but two – iPad 2s mounted in the electronically deployed and adjustable custom tables mounted behind the two front seats. The tables secure both the tablets and a Apple Bluetooth keyboard, and allow the Russian mobster in back to chat with his Swedish princess over Apple’s Facetime video conferencing system.

Mercedes hasn’t announced pricing yet, but anyone who’d pay €100,000 for a regular, crappy Mac-less old S-class won’t care about that.

At 219 mph, the Brabus iBusiness 2.0 is the world’s fastest Apple-obsessed office (Autoblog)