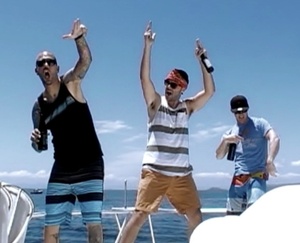 Hello broadsheet,
We are The Kitchen Boyz, (former member of The Midnight Phil Eoin Callers), now based in New Zealand. We didn’t have any decent cameras to film this so its mainly on iphones and argos camcorders. Band consists of Phat Traxxx (Dublin) DJ$ (Texas) and The Reverend Jessie Hendrix (California). The band formed in New Zealand about 6 months ago and we’ve been playing the live circuit for a bit. I know broadsheet has quite a few ex-pats living here in NZ so I’m hoping you can throw this up and maybe get a bit of interest as we are having our last gig here in Auckland quite shortly. Would be amazing to get a load of people together in Auckland holding’ their “Gunz Up”.

No Focail Way! They’ve Written A Tribute To Richie Kavanagh

For the Day What Appears To Be In It