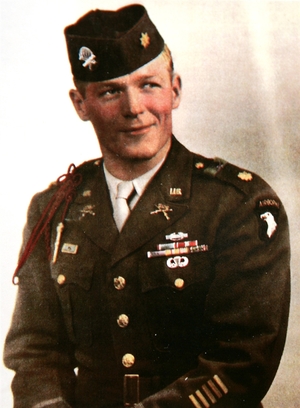 Major Dick Winters – the inspiration for HBO’s Band Of Brothers in which he was played by Damian Lewis (above left) , died last week at the age of 92.

Even as Parkinson’s disease began taking its toll on Dick Winters, who led his “Band of Brothers” through some of World War II’s fiercest European battles, the unassuming hero refused, as always, to let his men down.

Friends accompanied him to public events, subtly clearing a path through the adoring crowds for the living legend, whose Easy Company’s achievements were documented by a book and HBO miniseries. His gait had grown unsteady, and he did not want to be seen stumbling.

Winters “didn’t want the members of Easy Company to know,” William Jackson said Monday of his longtime friend, “Right up to the end, he was the company commander.”