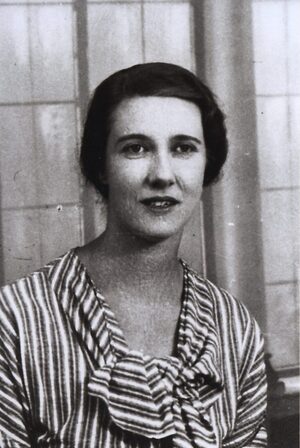 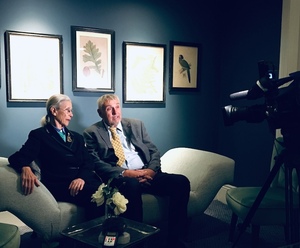 From top: Mary Elmes; Patrick Danjou, Mary Elmes son with Charlotte Berger-Greneche one of the people his mother rescued during the Holocaust.

‘Mary Elmes’, the true-story of the only Irish person recognised by Israel as Righteous Among the Nations will be broadcast at 5pm.

But who was Mary Elmes?

Born in Ballintemple, Cork, Mary Elmes smuggled dozens of children to safety during WW2 and although imprisoned by the Gestapo on suspicion of this work – she managed to survive and live a long life in the South of France with her husband and two children.

She’s a fascinating character for many reasons, and her work during the Spanish Civil War and then in Rivesaltes Refugee Camp in the South of France are noteworthy even in themselves.

But it’s for risking her life, rescuing Jewish refugees who were being sent to concentration camps that she’ll be most remembered.

Her story raises all kinds of questions about moral courage and humanitarianism – and contrasts sharply with the official policy of the Irish government during the Holocaust.

While untrained as a medic, she volunteered in 1937 with Save The Children in Spain and was appointed by the Quakers to run one of their hospitals in Alicante.

Franco expelled them in 1939 and after a brief rest in London and Cork she was assigned work at Perpignan – to oversee a cultural programme for some of the half a million Spanish refugees which had fled into France.

The refugee camps set up to deal with this crisis became an internment camp for Jews in Vichy France, and conditions were deplorable.

When Jews began to be transported from here to concentration camps in Eastern Europe from 1942 onwards, Mary was one of many relief workers who smuggled children to safety. It’s estimated that over 400 children were saved, of which at least 80 were directly helped by Mary Elmes.

She never sought any attention for her actions, and died in 2002 at the age of 93.

The documentary on Mary Elmes talks to Ronald Friend and Charlotte Berger-Greneche (two of the people whose lives she saved), her biographers Clodagh Finn (A Time To Risk All )and Paddy Butler (The Extraordinary Story of Mary Elmes), her family, and long-time Quaker researchers Bernard and Janet Wilson.

It also puts Mary’s work into wider context of Ireland’s refusal to take Jewish refugees during the Holocaust.

‘I think there was a very solid degree of latent antisemitism in Irish society based on fairly limited religious readings of Christianity, and prejudices they had picked up,’ said O’Driscoll, ‘In general what you found was the Dept. of Justice were very austere in their attitude to immigrants, and Jews in particular.’

Heino Schonfeld of the Holocaust Education Trust Ireland agrees that the numbers were shockingly low.

‘Unfortunately most of them were unsuccessful and they were not given a visa or not given a welcome to this country.’ he said. ‘To a large extent the reason was antisemitsm.’

Fergal Linehan in The Dublin Review of Books reviewed An Irish Sanctuary: German-speaking Refugees in Ireland 1933-1945 by Gisela Holfter and Horst Dickel which documents the stories of the 426 individuals (not all, but mostly Jewish) fleeing Nazi Europe who were granted asylum here.

Linehan mentions Anselm Horwitz who escaped to Ireland, but whose parents were denied a visa, deported to Minsk, and murdered in 1941.

And Linehan makes the point that Portugal – a country roughly the same size as Ireland – took in between 13-15,000 refugees at this time,

‘Thus a case is to be made for the moral culpability of the Irish state during this period. It failed to act in an appropriate manner to what was, very probably, the worst humanitarian crisis in the history of humankind.’

Of course Ireland wasn’t unusual in refusing visas; Ronald Friend, one of the children Mary Elmes saved, said that his father had been almost granted a visa for the UK, but it never came through.

Ronald’s father Hans Freund was an engineer, and his mother Eva a doctor who fled Berlin for Milan in 1933. The fascists passed the Italian Racial Laws in 1938 – similar to the Nuremberg Laws in Germany and the Aryanisation Laws in France – and Ronald and his family left for France in 1939.

After a short time in Paris, and then Marsac, they were forced to try to escape over the border into Switzerland, but were arrested by French police.

Hans and Eva were sent to the Gurs camp in the Pyrenees from where Hans was deported.

‘They were given two hours to say goodbye’. Before he was taken from Gurs to Drancy which was the main transportation centre in France.’

From here Hans was ‘sent to the extermination camp called Majdanek in Poland’,

. ‘And there was no news – nothing else we ever heard about our father after that.’

Ronald and his brother Mario were detained in the Rivesaltes camp from where Mary Elmes managed to rescue them in 1942.

Others Mary helped to get out were Georges Koltein and Charlotte Berger-Grenche who were in Ireland for the opening of the Mary Elmes Bridge in Cork last year.

Charlotte was a young child when her 31-year old mother, Zirl Berger was murdered in Auschwitz.

‘I don’t remember a lot of things, I was very small. I just have one glance of my mother and me; she’s dressing me on the bed. And my mother was deported from Rivesaltes to Drancy, and Auschwitz then.’

Charlotte credits a member of the OSE (Jewish organisation), Vivette Samuel and others with getting her to safety, and this is something which Mary’s daughter Caroline also emphasised.

‘She was not alone. There was a lot of people doing the same thing with her – she couldn’t do all that without other people.’

She pointed out that her mother never desired recognition for her work, eschewing a saviour narrative, and acknowledging the many people who worked together to do what they could under dire circumstances.

And yet, there’s no doubt Mary Elmes was a remarkable woman – a humanitarian who ‘had a tremendous ability and persistence to do what was right,’ as her cousin, Mark Elmes put it::

‘She stuck with it through thick and thin, and all she was concerned about were the victims.’