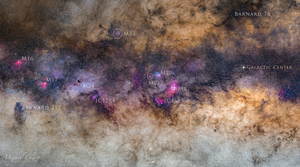 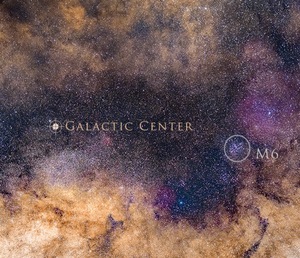 Behold the centre of the Milky Way galaxy – a mere 26,000 light years away (as the photon flies) toward the constellation of Sagittarius. To wit:

Even on a dark night, you can’t really see it though. Gaze in that direction, and your sight-line is quickly obscured by intervening interstellar dust. In fact, dark dust clouds, glowing nebulae, and crowded star fields are packed along the fertile galactic plane and central regions of our galaxy. This annotated view (top pic), a mosaic of dark sky images, highlights some favourites, particularly for small telescope or binocular equipped sky-gazers. The cropped version (second pic) puts the direction to the galactic centre on the far right. It identifies well-known Messier objects like the Lagoon nebula (M8), the Trifid (M20), star cloud M24, and some of E.E. Barnard’s dark markings on the sky. A full version extends the view to the right toward the constellation Scorpius, in all covering over 20 degrees across the centre of the Milky Way.