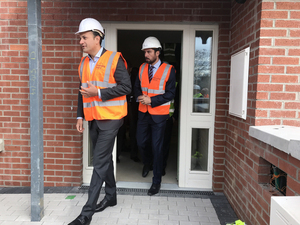 The National Homeless and Housing Coalition is holding a demonstration on Saturday, April 7 over the housing crisis. It has the support of dozens of organisations spanning civil society groups, trade unions and political parties.

To highlight the urgency of this issue and the importance of the march, I have expanded on some ‘quick facts’ published in Home Truths – a special newspaper being distributed nationally in advance of the march by supporters of the coalition. 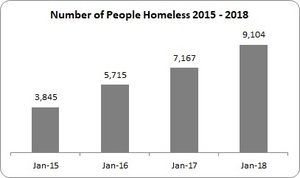 Homelessness has seen a steady rise since 2015, more than doubling. The last year saw an increase of over 1,900; this compares to an annual average increase of about 1,650 in the previous two years. Of the 9,100 homeless, nearly 3,300 are children.

These numbers only refer to people in emergency accommodation. The Housing Agency’s Summary of Social Housing Assessments 2017 shows nearly 20,500 households living with family or friends. And this doesn’t include people in the same circumstance but not on the housing list.

There are over 85,800 households on the social housing waiting list – nearly 200,000 adults and children. That’s a bad enough. But a look at some of the sub-categories illustrates the dismal realities of this fact:

Nearly 40 percent have been waiting for five years or more

Over 7,000 have a household member with a disability or exceptional medical condition

Nearly 18,800 are actually in employment

Over 72,000 households are in residential mortgage arrears. Over two-thirds have been in arrears for 90 days or more. In addition, over 20 percent of employees are officially categorised as ‘low-paid’, while 13 percent at work live in deprived conditions. Evictions and inability to afford rent are now driving forces behind homelessness.

4. The Rise and Rise of Rents

According to Daft.ie, rents have increased by over 60 percent in the last five years. During this same period inflation rose by less than 1 percent. Rents are increasing by over 10 percent a year. Wages are only increasing by 2.5 percent. Every year, rents are moving further out of reach of low and average income groups.

Given that these are Daft.ie figures, they are asking rents. But this shows that new apartments coming on to the market are not going to make a contribution to reducing the level of rents or increasing the stock of affordable rental accommodation. And market analysts are projecting a 20 percent rise over the next two years. Excessive rent increases will be with us for a while.

When compared to other EU capitals, Dublin is at the top of the rent league (only London is more expensive than Dublin). If you were renting in the city centres of Berlin, Amsterdam, Vienna or Brussels, you’d be paying €8,400 less per year to your landlord. 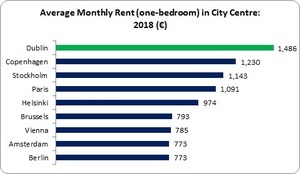 This shows the difference between managing market rents and, in the case of Ireland, not managing them.

(Note: the above data is taken from Numbeo, a user-generated site. This is not as accurate as a properly produced statistical survey. However, the National Competitiveness Council has started using this site, stating that ‘the scope and depth of the data gives this approach some merit’.)

6. Subsidies to the Private Rental Sector

In the last 12 years, the state has handed over €6.4 billion to private landlords and the private rental sector. Under current targets, the Government will be spending nearly a €1 billion a year by 2022. Question: is it more financially and socially efficient for the state to build and rent housing through a public agency (local authorities, public company, etc.), or to rent housing from the private sector? 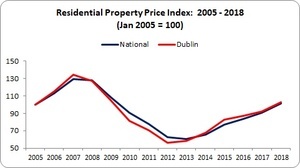 House prices have yet to return to the stratospheric pre-crash levels. However, since house prices troughed in late 2012 / early 2013 (the above graph includes both new and second-hand), national prices have risen 69 percent in five years while Dublin prices rose by 76 percent. In the last year, prices have risen by 12 percent.

There are several contributors to prices: availability and price of land (and impact of land hoarding); availability and cost of credit; wages and incomes; desirability and viability of alternative housing tenures – in particular, rental accommodation.Supply of housing is only one factor in price and, at times, not the main or relevant factor as Mel Reynolds and Dr. Lorcan Sirr have pointed out.

8. Home Ownership Increasingly Out of Reach

In Dublin, a couple buying their first home will have to pay, on average, a deposit of over €40,000 and have a combined income of over €100,000. Currently, the average wage for workers is €38,000. For average-income employees, it is difficult to see how they can afford to buy a house in Dublin.

It has been well-established that Irish mortgage interest rates are higher than in other EU countries. So, in addition to increasingly high house prices, were average income earners able to get to the purchase stage, they would find themselves paying high monthly mortgage costs.
Let’s do a stylised comparison with other EU countries – a €275,000 mortgage for 20 years at fixed rates. 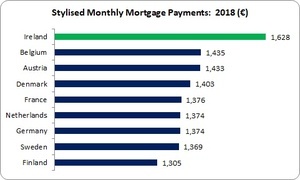 Like rents, Irish monthly mortgage payments are higher than in other countries. There will be differences depending on length of mortgage and the mix of variable and fixed rates, but this stylised comparison is likely to hold across the range of option – especially as Irish interest rates are 3.7 percent while in many of the other countries they are below 2 percent.

We are still paying for the banking crisis.

There’s a housing cooperative in Ballymun – the Ó Cualann Cohousing Alliance – which is building houses for sale at prices that can come in well below (30 percent or more) market rates. How can they do this? First, the land is provided at heavily subsidised prices from the Dublin City Council – so land costs are reduced.

Secondly, they don’t have a developers’ margin (though the private companies that build the houses do so at profit). That’s the difference.

The Journal.ie’s Fact Check came up with a similar finding when asking whether it would be cheaper for the state to build houses.

What is driving high property prices?

The cost of land (which is being inflated given land-hoarding and the lack of market management) and developers’ profits.

The cost of land and developers’ margins can account for a third of the price of a home in Dublin.

Those are just a few reasons to march on April 7. But actually, there are hundreds of thousands of reasons to march – the vast number of people in housing need. These are the stake-holders in this march. Indeed, they are the only stakeholders.

I will be marching with them on April 7. Hopefully, you will too.

The ‘Housing is a Human Right’ march will be held on Saturday, April 7th at 1pm assembling at 1pm at the Garden of Remembrance, Parnell Square, Dublin 1.