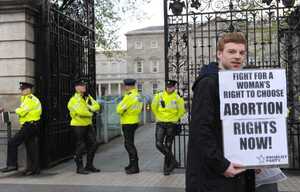 Labour Party deputies will be expected to vote against a Bill in the Dáil today which seeks to legislate for the “X-case” abortion ruling, despite expressing support for such a move at last week’s party conference.

Following a 1992 Supreme Court ruling – known as the X-case – abortion has been legal in circumstances where there is a substantial risk to the life of the mother.
However, successive governments have not enacted legislation to give full effect to the ruling.

A Private Members’ Bill put forward by Socialist Party TD Clare Daly, along with People Before Profit TD Joan Collins and Independent TD Mick Wallace, seeks to create a legal framework for abortion in Ireland where a woman’s life is at risk.