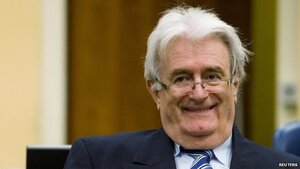 “I should have been rewarded for all the good things that I’ve done because I did everything within human power to avoid the war and to reduce human suffering,” said Mr Karadzic, who still sports a shock of thick white hair and occasionally smiled as he spoke with spectacles perched on his nose.

“Neither I nor anyone else that I know thought that there would be a genocide against those who were not Serbs,” claimed the man accused of bearing responsibility for the slaughter of about 8,000 Muslims at Srebrenica and for the bombardment of Sarajevo that claimed some 10,000 lives.

Mr Karadzic said he was “a mild man, a tolerant man, with a great capacity for understanding others . . . a literary man, a group analyst and a psychiatrist” who had “nothing against Muslims or Croats”.

“I never made any discrimination. My hairdresser of many years was a Muslim,” he added.