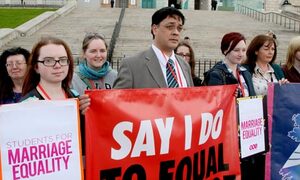 A MOTION to introduce same-sex marriage in the North was narrowly defeated in the Northern Ireland Assembly yesterday when only three unionist members supported it.

However, equality campaigners hailed the closeness of the vote as evidence of changed times. The motion to extend the rights already available under civil partnership was brought by Sinn Féin and the Green Party, but it was effectively blocked by the DUP, which tabled a “petition of concern”, meaning it needed cross-community support.

The vote was lost by a slim margin of 45 to 49. Of the 45 MLAs in support of the motion, only three were unionists.