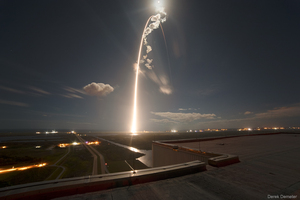 How does the weather on the Sun affect the weather here? If a bid to find out, NASA and the European Space Agency launched the Solar Orbiter, naturally, last Sunday. To wit:

This Sun-circling robotic spaceship will monitor the Sun’s changing light, solar wind, and magnetic field not only from the usual perspective of Earth but also from above and below the Sun. Pictured, a long duration exposure of the launch of the Solar Orbiter shows the graceful arc of the bright engines of United Launch Alliance‘s Atlas V rocket as they lifted the satellite off the Earth. Over the next few years, the Solar Orbiter will use the gravity of Earth and Venus to veer out of the plane of the planets and closer to the Sun than Mercury. Violent weather on the Sun, including solar flares and coronal mass ejections, has shown the ability to interfere with power grids on the Earth and communications satellites in Earth orbit. The Solar Orbiter is expected to coordinate observations with the also Sun-orbiting Parker Solar Probe launched in 2018.