Who is Tall Justin? 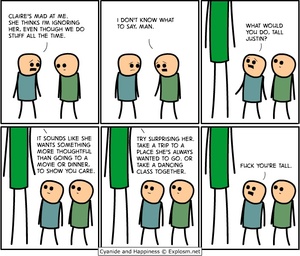 It’s 369 feet high – about twice the size of the Statue of Liberty (minus the foundation) and it’s somewhere in Humboldt Redwoods State Park, California, but “Stratosphere Giant,” as it’s known, it is no longer the tallest tree in the world.

After its short four-year reign as World’s Tallest, two hikers, Chris Atkins and Michael Taylor, were deep in another section of another park, Redwood National Park (purchased in 1978 during the Carter administration) when they came across a new stand of trees, taller than anyone had ever seen before. The tallest of the tall is 379 feet 4 inches, 10 feet taller than the Giant. It’s now called “Hyperion.”

The World’s Tallest Tree Is Hiding Somewhere In California (npr)