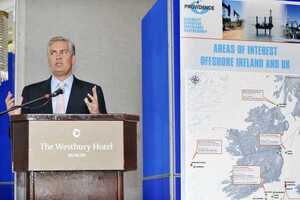 Tony O’Reilly jnr, chief executive of Providence Resources, believes the company has a one-in-four or one-in-five chance of making a commercial oil find off the Dublin coastline.

Providence’s plans to drill wells six kilometres off Dalkey have sparked considerable opposition, particularly in south Dublin. More than 700 submissions, most of them objecting, have been made to the Department of Environment, which will decide shortly whether to grant a foreshore licence application.