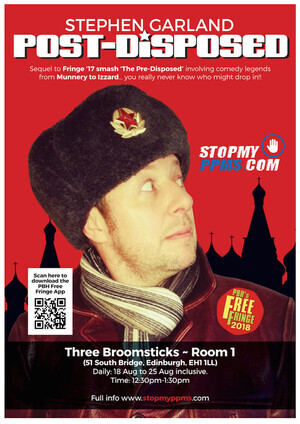 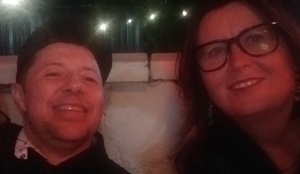 Stephen Garland’s one-man show Post-Disposed about coping with Primary Progressive MS, played in Longford last week ahead of a run at the Edinburgh festival.

Vanessa Foran (her off the telly!) was there.

Stephen Garland was introduced to me, probably the same way as most of ye; by Johnny Keenan on the telly.

A funny man and comedy promoter who had MS (PPMS to be pinpoint about it) who was medically categorised and characterised as Pre-Disposed. I took it at that,

I enjoyed his company when on BS.tv, and donated to his fund for stem cell treatment. Like most of ye I suppose, I continued to follow his journey from the comfort of a chair. Until last weekend, when Pre-Disposed was formally re-branded Post-Disposed.

Broadsheet  on the Telly viewers will know the same as I did, a night of comedy in the style of storytelling. The same people will also know I have a low bar when it comes to being entertained, so there was minimal risk of impatience for the bright lights of downtown Longford anyway.

Yet, I will admit my main motivation for travelling to Longford was to see how a Theatre and a GAA club with Slashers in its name could co-exist; but I was as open-mined about Stephen Garland’s Post-Disposed Live Storytelling Show as I was about Longford.

In all truth I can say I had a great time. Firstly, The Backstage Theatre and Longford Slashers GAA are indeed true love and life partners; it was like one could live without the other. Happily, contentedly and thriving side by side; and the accommodation for the show was the most comfortable and easy I have ever sat in.

So Post-Disposed. I just looked up Disposed and it comes back from Yahoo as an adjective; inclined or willing. I don’t think I could even become accepting of that as a medical status for a diagnosis ( like Stephen’s, certainly not enough to find the funny side of it, I would be more likely to deny, interrupt the medical professionals, and probably argue my way out of accepting the diagnoses.

But I know I would not have acted so independently and so quickly to change my prognosis like Stephen Garland did.

Post-Disposed is a whirlwind that you find yourself buckled in for the moment Stephen Garland enters and opens his story. The colour, the speed, the timing is flamboyant and in-your-face, just like his management of his disease I suppose; yet the evening brushes past like a gentle scented breeze, like you get when on a foreign holiday when you know you’re in a strange unfamiliar environment, yet wonderfully comfortable there.

Post-Disposed travels 18 months from Longford, to Spain to Brazil to Scotland to Broadsheet to Russia and back to Longford again; I was Post-Exam Hall exhausted yet didn’t stop smiling, seriously, for 120 minutes. It was the easiest standing ovation I ever ended up in.

The unfortunate thing is that Post-Disposed has to trim down to 50 minutes, however a walk-up audience won’t miss out, because the version I was lucky to get a mention in (mortified) contained a home crowd that needed attending to, which, as you’ll learn, is a requirement under a local technicality; Speaking Away.

From Hat to Hat, from Sungas to Mobility Scooter; Stephen Garland’s Post-Disposed might just be what comedy needs right now.

A sound bite; because that is what I was told the Edinburgh audience and participants need (see above) Mammy Mia from the Costa del Longford; colours, laughing, family of all shapes, connections, sizes and ages, itchy eye moments with every walk of life getting a spoke in, the unexpected adversity that comes to all our houses yet has the potential to bring out the best thing about the Irish; the ability to see the funny side of everything.

Good Luck in Edinburgh Stephen; love you or hate you whatever; just make sure they don’t forget you.