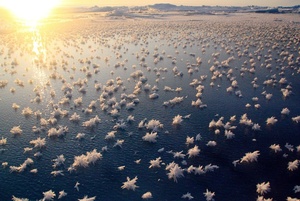 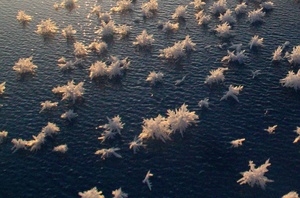 Frost flowers form when newly formed ice sublimates, that is ice changes directly from a solid to a gas totally bypassing the liquid stage. Initially, the water vapor formed by sublimation is the same temperature as the sea ice, but gets quickly cooled by the cold air. The air is then becomes supersaturated with water vapor, which means the air has too water much in it.  Air really doesn’t want to hold all that excess water vapor, so when the supersaturated air touches another ice crystal the water vapor quickly turns back into ice. This process is called nucleation, on little chunks of ice that are sticking up out of the water or even ice crystals floating in air. Over time, more and more crystals form on existing ice. The crystals expand outward in spiky arms, creating the little punks we know as frost flowers.

Skating On Thin Ice. In Your Kacks 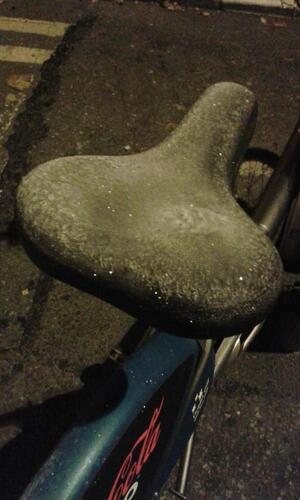