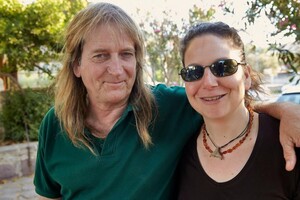 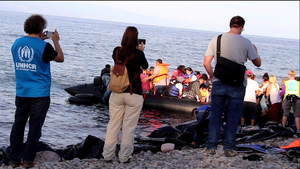 From top: Eric and Philippa Kempson, a British couple who’ve been living in Lesbos for 16 years; and people taking pictures of refugees arriving in Lebsos, including a UNHCR worker

The failure of the UN to address the crisis has been a feature of Olga’s stay but one couple whose home has become a refugee centre may help change that.

I had read about Eric and Philippa Kempson before I arrived on the island of Lesbos, Greece in mid-October and was very much hoping to meet them.

A couple of days into my stay there, I felt very lucky to be introduced to them and to learn they worked closely with the Norwegian volunteer group I had joined, Drapen i Havet.

If I admired the couple before ever meeting them, I felt utterly humbled by them after three weeks in Lesbos.

Eric and Philippa, originally from Winchester, England, and Newport, Wales, respectively, have lived in Lesbos for 16 years. Along with their daughter Elleni, they dealt with the crisis unfolding less than 100 metres from their home single-handedly for months before any volunteers or NGOs arrived to provide assistance.

Eric was even banned from the beaches for some time earlier this year, after he tried to erect a tent on a beach. Weeks later, after the number of refugees arriving started to rise sharply, the Greek authorities came to him for help.

From the outside, their pretty, cosy home doesn’t resemble a place to live but instead has the hallmarks of a crisis centre – with loads of cats.

Numerous make-shift extensions have been made to the back of their house, swallowing up space in their large back garden full of olive trees, where boxes upon boxes of donated clothes, shoes, blankets and other essentials are stored.

Piles of unopened boxes sit under plastic tarpaulins waiting to be stored away as the donations pour in from around the world.

A stand-alone, for now defunct shop – where wood carver Eric used to sell his artwork – sits at the side of their house and, as it’s equipped with a shower, toilet and kitchenette, it has become a place where refugee families are often brought to shower, change and get something to eat, before continuing their journey.

Many, many volunteers and journalists traipse in and out of the Kempsons’ home, at all times of the day and night, either to collect essentials, get information, or sit with them over a hot cup of tea or cold beer to unravel whatever traumatic event happened that day.

As thousands upon thousands of people arrive on the shores outside the Kempsons’ home in Eftalou, day in day out, Eric and Philippa’s mammoth effort to ensure these people come ashore safely, change out of their wet clothes and get food and water isn’t something they might choose to do one day and not bother with the next.

Helping them is their life.

Even some refugees coming ashore, who spot long-haired Eric, shout, “Mr Eric, Mr Eric!”, most likely because he exhaustively posts videos on YouTube about what’s happening in Lesbos almost daily.

Always armed with a smile and a dry sense of humour, softly spoken Philippa could be a counsellor at this stage – given the countless hours of warm empathy I’ve seen her extend to the distressed volunteers who come and go, myself included.

Eric doesn’t mince his words and has little time for niceties, mainly because he’s a man with a huge heart facing a gargantuan challenge head-on.

And it’s easy to see why.

Last Monday Eric travelled to Glasgow in Scotland where he was invited to speak at a Positive Action In Housing event.

In his speech, which can be viewed here and read here, Eric bluntly recounted the harrowing events of the previous week.

He told those in attendance about multiple boats sinking, many bodies being found and dangerous rescues being carried out by untrained volunteers.

He talked about the EU giving €3billion to the Turkish government, in order to curb the procession of refugees from Turkey to Greece, and how he has sadly witnessed the Turkish coastguard trying, often successfully, to sink boats.

He also spoke about the blatant lack of professional expertise present on the island and how the UNHCR does very little, despite having an office on the island.

He also claimed that he’s seen a worrying rise in certain NGO groups – including the Red Cross – raising huge amounts of money for the crisis in Lesbos with little, or nothing, to show for it.

Anyone who has been to northern Lesbos in recent months won’t think Eric’s claims, particularly about the UNHCR, are outlandish.

Every volunteer and journalist I met during my three weeks whispered the very same thing, with a bewildered look on their face: Where is the UNHCR? Where are the experts?

After Eric gave his speech, the UNHCR and the Red Cross both issued statements to Third Force News in Scotland, dismissing his claims.

But all was not lost.

Interestingly, Eric’s trip to Scotland may have yielded some small hope for the refugees who will land in northern Lesbos this winter – all because of a chance meeting with Alessandra Morelli, the UNHCR’s Senior Operations Coordinator for Greece, in the departures lounge of the Mytilene International Airport in Lesbos, just before he flew to Athens and then Glasgow last Monday.

Eric had met Ms Morelli before.

In mid-October, when UNHCR High Commissioner for Refugees António Guterres visited the island, and there was a heavy media presence, Ms Morelli, who was accompanying Mr Guterres, appeared next to Eric as he was helping to bring in a boat of refugees.

He recalled: “She said, ‘I know you, don’t I? You’re Eric’. I said, ‘I need help.’ I told her, ‘More people are going to die in the winter unless we get tents on the beaches with heaters, blankets and oxygen.’”

The Kempsons need assistance in getting permission from the local authorities to erect the tents on the beaches.

After speaking with Ms Morelli, Eric claims she gave him the first name and number of a woman who works with the UNHCR who, Ms Morelli said, would liaise with Eric and Philippa.

“[Ms Morelli] said, ‘she can get you whatever you want’,” said Eric.

Several days passed and neither Eric nor Philippa heard anything. So Philippa texted the number she was given for the woman, called Lucia. I’ve seen the following texts.

“Hallo there! Thanks to you all for the excellent job you do. Will stay in touch and continue discussing so we can get you more supplies. Cheers.”

Within minutes, Philippa texted Lucia back:

“It would be good if we could discuss the idea of tents on the beaches when you have time. Thanks.”

“We need to discuss these tents as soon as possible. The weather is changing now and it will become urgent.”

“Hi there, I gave your contact to my colleague in Molyvos so he will contact you to discuss the needs. Thanks.”

“I haven’t heard anything. This is an urgent issue as the weather is changing.”

This series of texts, and the numerous failed attempts to get hold of anyone in the UNHCR who would listen to him and his wife, was fresh on Eric’s mind when he eyed Ms Morelli in the departures lounge of Mytilene International Airport last Monday.

A discussion between the pair followed and, once again, Ms Morelli promised to get Eric whatever he wanted.

“I told her, ‘Until you prove it to me I’m not going to believe anything you say,’” said Eric.

Before Eric’s plane had even landed in Athens, where he had a short stopover before continuing to Glasgow, a representative from the UNHCR called to Eric and Philippa’s home in Eftalou – a visit I witnessed.

Eric returned to Lesbos on Thursday and, on Friday, this representative met with Eric and they discussed plans to place tents on several beaches which would be equipped with heaters and oxygen tanks.

They also talked about getting stretchers and wheelchairs for Molyvos Harbour.

Eric and Philippa don’t believe this meeting would have happened had he not met Ms Morelli in the airport.

Nothing is set in stone but Eric is cautiously hopeful of finally getting what he has been pleading for, for a very long time – help from people who are experts when it comes to refugee crises. 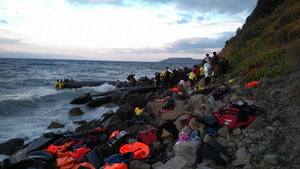 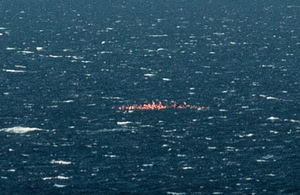 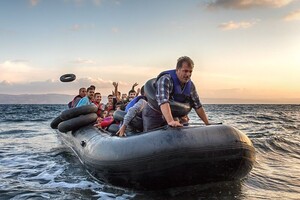 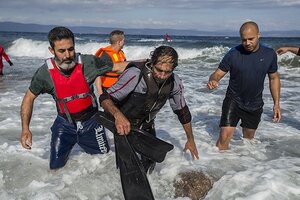 16 thoughts on “In Their Backyard”