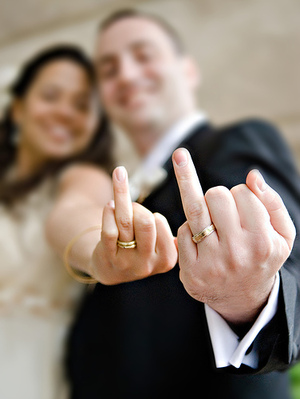 Our obsession with The Irish Times’ obsession with ‘sham marriages’ reaches it conclusion today. We promise to leave this alone now. But an editorial in this morning’s paper attempting to justify its coverage of the story (front page article based on the fears of one superintendant registrar, etc). is worth sharing. Why? So you can:

Read! That not all marriages are in the name of love

Startle As she reveals NINE people were deported this year for breaking laws “in relation” to sham weddings.

Gulp! When you realise they weren’t kicked out because they didn’t know their new spouses. But for other things like false documentation and evading EXISTING deportation orders.

Shake! Your head as you travel in a taxi and listen to FM104 conducting a ‘debate’ on the matter, using The Newspaper of Record as its source.

Freeze! As you hear Nigerians, Pakistanis and anyone unfortunate enough not to have been born here be vilified by almost every caller.

Wonder! If this absurd story is actually inciting racial hatred.

Wish! That Madam had won that seat for the PDs after all.

Then! Do the Crosaire.