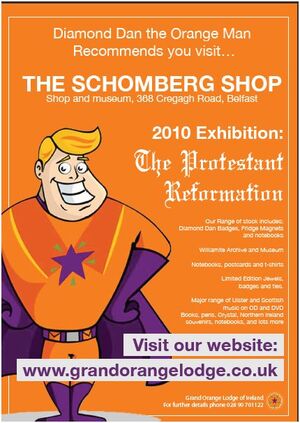 The Orange Order appear to have won a two-year copyright fight to keep their superhero mascot, Diamond Dan The Orange Man (as this poster – via Clark Hazard – would suggest).

Dan is named after one of the Order’s founding members, Dan Winter – the Diamond refers to the Institution’s formation at the Diamond, Loughgall, in 1795.

His Superpowers include being able to hit a Lambeg drum by just staring at it.

Darby O’Gill And The Little Candidate