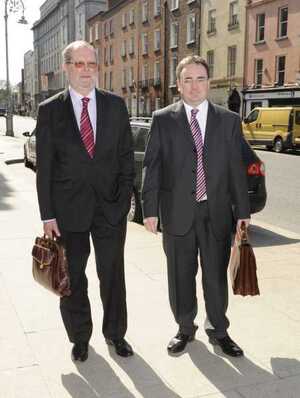 Don’t ask them. They run Nama.

“Nobody knows. That is all that can be said in reply to Ireland’s most pressing question – is the National Asset Management Agency working? Nama was established to absorb €81bn of bad property loans held by Irish banks, allowing the lenders to recapitalise. Yet the country’s banking crisis continues, two years after Lehman Brothers collapsed. The banks remain on life support through a blanket guarantee on deposits and most debt; Anglo Irish Bank continues to make ludicrous losses; and there is growing scepticism over official assurances that the cost of rescuing the system has been contained.”

Yeah. Yeah. We know that.

Nama is an odd creature: part debt collection agency, part property developer. As well as toxic loans, it may end up with a portfolio of property which was collateral for the banks’ lending binge. It was meant to fix the broken banks, convince taxpayers they might be repaid and reassure the markets the banks’ liabilities would be met in full. Facing in three directions, it has not appeared convincing in any: slow, bureaucratic, initially indecisive and almost excessively transparent (every toxic loan is assessed individually).”

(No link as FT operate a paywall. Harrumph).

Yes But What Does A Credit Downgrade Really Mean?