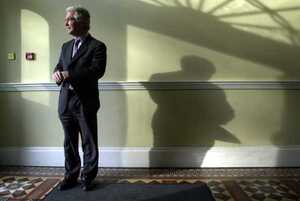 Therefore she is one of his 12 creditors.

And has an equal say in who is appointed to value her husband’s estate.

Equal to Anglo, which is owed more than €100 million (92% of his total liabilities)

In the High Court this morning, seven of the creditors blocked the appointment by Anglo of its own insolvency practitioner (to replace the existing one).

Guess who is among the seven?