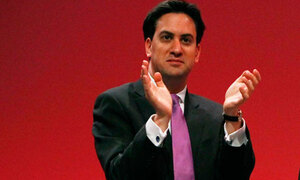 He’s on his feet as we write:

“In 1940, my grandfather, with my Dad, climbed onto one of the last boats out of Belgium. They had to make a heart-breaking decision – to leave behind my grandmother and my father’s sister. They spent the war in hiding, in a village sheltered by a brave local farmer. Month after month, year upon year, they lived in fear of the knock at the door.At the same time, on the other side of Europe, my mother, aged five, had seen Hitler’s army march into Poland.

She spent the war on the run sheltering in a convent and then with a Catholic family that took her in. Her sister, her mother and her.

My love for this country comes from this story. Two young people fled the darkness that had engulfed the Jews across Europe and in Britain they found the light of liberty.”

We still prefer the Brother.

Meanwhile, At The Labour Conference, Galway

Cyprus, The Principal And Labour’s Principles