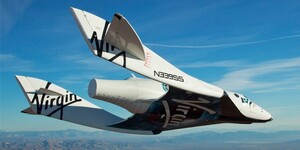 The Virgin Galactic Spaceship Two completed its first piloted space flight yesterday. Which means too-rich dingbats Bill Cullen and Tom Higgins, of Irish Psychics Live, are closer to their dream of becoming the first Irishmen in space. They are among 320 potential astronauts who have paid $200,000 (hand on luggage is extra) for the vanity jaunt.

No date has been set for the first commercial flight. But this short film of the test flight shows how Bill will be, ahem, ‘fired’ into the stratosphere. And to think he was once so poor he used to simulate space flight by putting lit bangers up his arse. Golden times.