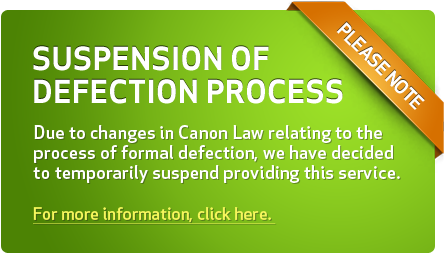 CountMeOut.ie, a site for people wishing to formally leave the Catholic Church has suspended its services.

Up to 12,000 have downloaded details from the site, set up in the wake of the Ryan Report.

However, as guests of Hotel California, discovered: “You can check out but you can never leave.”

Changes in Canon Law mean there is no formal process to excommunicate oneself from the Vatican’s grip.

A church spokesman told RTE: “The Holy See confirmed at the end of August that it was introducing changes to Canon Law and as a result it will no longer be possible to formally defect from the Catholic Church.”

A note on the site advises: “For those who have applied to defect but have not yet received confirmation: the only course of action is to wait and see what changes are to be implemented. A representative from the Catholic Church may contact you to explain the delay.”

As the Godfather says: “Just when I thought I was out, they pull me back in.”