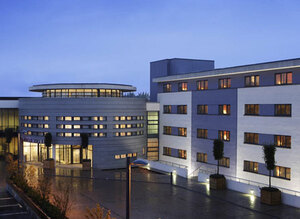 The Daily Star scoop was on the money.

There was a kangaroo on Saturday night at a 30th birthday party in The Clarion Hotel.

Speaking to the Irish Times this morning, the Clarion’s general manager Garret Marrinan confirmed the incident and said the hotel had passed on CCTV footage to the gardaí.

“We had a 30th birthday here in the hotel with between 150 and 200 guests and at about 11pm at night the duty manager noticed a group of people hovering on the dance floor. He went to investigate and noticed some kind of a strange animal coming out of a box and shortly after going back into it.

He wasn’t sure what it was exactly but because we have a no pets policy in the hotel called security who forced the people who brought the box in to take it out of the hotel.

Mr Marrinan said he had no idea the animal was a kangaroo until contacted by the gardaí on Monday. He added the hotel was “offering every assistance possible” to officers.

“We’re horrified by this. We would do two or three parties a week and up to now, they’ve all been normal events. Absolutely nothing like this has happened before, either here or at other Clarion hotels and this is something we don’t want to be associated with.”