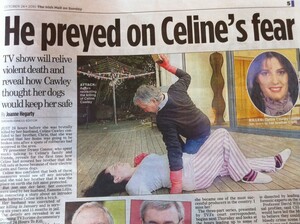 “The documentary which has reconstructed her violent death using lookalike actors also allows people who knew and worked with her to express how they felt she had been misrepresented as being hard and cold.”

Today’s Irish Mail on Sunday on TV3’s documentary, 24 Hours To Kill, to be shown on November 4.

Irish Lad Calls TV3 Psychic And Pretends To Be Will Smith