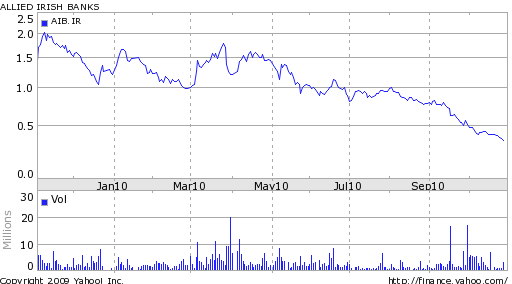 The Irish Independent this morning reveals the people who bought lots of AIB shares and now wish they hadn’t.

Substantial monies were also invested on behalf of the Rotunda Hospital, the Royal Hospital in Donnybrook and Mercers Hospital.

The Catholic Marriage Advisory Centre in Cork, the Samaritans, the Legion of Mary and the Irish Society for the Prevention of Cruelty to Children were also AIB shareholders.

According to the register of AIB’s shareholders, the Church of Ireland holds one of the biggest individual shareholding in the bank, with 750,000 shares.

When the shares were trading at their highest price of €23 four years ago, the Church of Ireland’s shares were worth as much as €17.3m. But the wipeout means its stake in the bank now stands at just €262,500.

Shares held by the Archbishop of Dublin, Dr Diarmuid Martin, and Archbishop Dermot Clifford on behalf of their dioceses were also badly hit.

Credit unions in Carrick-on-Shannon, Co Leitrim, Castlerea, Co Roscommon and in Dublin are sitting on a total investment loss of more than €100,000 between them.