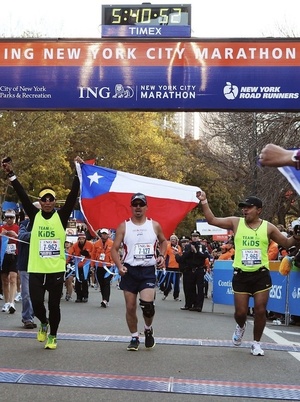 Edison Peña, one of the 33 Chilean miners rescued a few weeks ago after being trapped following a mine collapse, spent many of his 69 days underground, running. He did loops of three to six miles a day in sawed-off steel-toed boots, and when he was finally taken above ground he stated his intent to race in the New York City Marathon.

Race organizers figured they’d fly him up as a special guest, but Peña insisted on racing. He wanted to finish in under six hours, and the Marathon officials, fearing for the health of a guy who’d never run a marathon before—and who, lest you forget, had just spend two and a half months underground—pushed him to walk as much as he needed. But Peña ran most of it, completing the first half in around two hours and finishing the entire race in five hours, 40 minutes and 51 seconds.