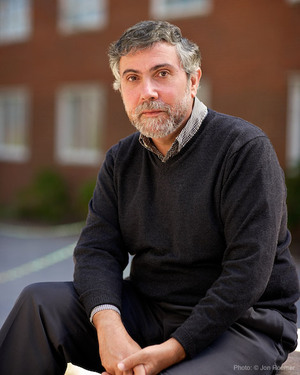 What we need now is another Jonathan Swift. Most people know Swift as the author of “Gulliver’s Travels.” But recent events have me thinking of his 1729 essay “A Modest Proposal,” in which he observed the dire poverty of the Irish, and offered a solution: sell the children as food. “I grant this food will be somewhat dear,” he admitted, but this would make it “very proper for landlords, who, as they have already devoured most of the parents, seem to have the best title to the children.”

O.K., these days it’s not the landlords, it’s the bankers — and they’re just impoverishing the populace, not eating it. But only a satirist — and one with a very savage pen — could do justice to what’s happening to Ireland now.

The Irish story began with a genuine economic miracle. But eventually this gave way to a speculative frenzy … financed with huge borrowing on the part of Irish banks, largely from banks in other European nations.

Then the bubble burst, and those banks faced huge losses. You might have expected those who lent money to the banks to share in the losses. … But, no, the Irish government stepped in to guarantee the banks’ debt, turning private losses into public obligations.

Before the bank bust, Ireland had little public debt. But with taxpayers suddenly on the hook for gigantic bank losses,… the nation’s creditworthiness was put in doubt. So Ireland tried to reassure the markets with a harsh program of spending cuts… — … those spending cuts have caused a severe recession…

But there is no alternative, say the serious people: all of this is necessary to restore confidence. Strange to say, however, confidence is not improving. On the contrary: investors have noticed that … austerity measures are depressing the Irish economy — and are fleeing…

Now what? Last weekend Ireland and its neighbors put together … a “bailout.” But what really happened was that the Irish government promised to impose even more pain, in return for a credit line … that would presumably give Ireland more time to, um, restore confidence. Markets, understandably, were not impressed: interest rates on Irish bonds have risen even further.

Does it really have to be this way? …Ireland, say the wise heads…, must continue to inflict pain on its citizens — because to do anything else would fatally undermine confidence.

But Ireland is now in its third year of austerity, and confidence just keeps draining away. And you have to wonder what it will take for serious people to realize that punishing the populace for the bankers’ sins is worse than a crime; it’s a mistake.