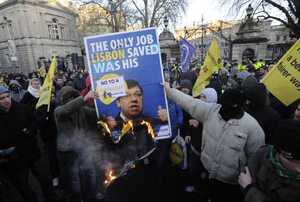 Ambrose Evans-Pritchard, the Telegraph’s Euro-sceptic, Kraut-bashing International Business Editor (on his blog today) attempts to answer some pertinent questions about the bail-out, namely these two:

Should the Dail vote against the budget on December 7? And should the next government – with Sinn Fein in the coalition? – tell the EU to go to Hell, do an Iceland, wash its hands of the banks, and carry out a unilateral default on senior debt by refusing to extend the guarantee?

The risks are huge, but then the provocations are also huge. And there is a score to settle. Did the EU not disregard the Irish `No’ to Lisbon, just as it disregarded the first Irish `No’ to Nice? Did it not trample all over Irish democracy? It is not for a British newspaper to suggest which course to take. Both outcomes are ghastly, but as one Irish reader wrote to me: if  Eamon De Valera  could defy world opinion in 1945 by sending condolences to Germany for the death of the Fuhrer, today’s leaders need not worry too much about scandalizing those who made them swallow Lisbon.

Compliance is traumatic. Default is traumatic. What the Irish have before them is a political choice about what they wish to be as a people, and a nation.

Why should the Irish should pay the entire price for upholding the European banking system, and why they should accept ruinous terms?

Ireland did not run large fiscal deficits or violate the Maastricht Treaty in the boom years. It ran a fiscal surplus, (as did Spain) and reduced its public debt to near zero. German finance minister Wolfgang Schauble keeps missing this basic point, but then we don’t want to disturb a comfortable – and convenient – German prejudice. Patrick Honohan, the World Bank veteran brought in to clean house at the Irish Central Bank, wrote the definitive paper on the causes of this disaster from his perch at Trinity College Dublin in early 2009. Entitled “What Went Wrong In Ireland?”, it recounts how the genuine tiger economy lost its way after the launch of the euro, and because of the euro. “Real interest rates from 1998 to 2007 averaged -1pc [compared with plus 7pc in the early 1990s],” he said. A (positive) interest shock of this magnitude in a vibrant fast-growing economy was bound to stoke a massive credit and property bubble.