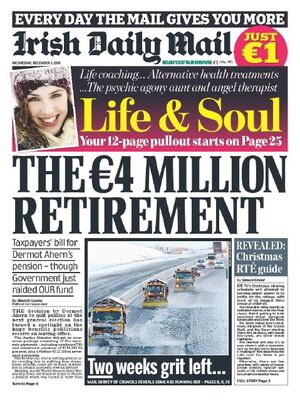 JUSTICE Minister Dermot Ahern will be able to retire with a total package worth €308,000 — thanks to a law introduced by former finance minister Charlie McCreevy.

His annual pension of €129,000 alone will be worth more than the basic €92,672 salary to which he would have been entitled if elected as a backbench opposition TD at the next General Election.

“I’ve no practice to go back to. I didn’t go into politics for the money,” he said

Startling fact: If Mr Ahern had been forced into opposition after the next election, he would only have been entitled to a basic TD’s salary because long-service payments are to be abolished.

Oh honourable gent, your embrace of the golden years will not go unrewarded.