On this day (December 7), in 1921, the Irish Free State Treaty was signed between Ireland and Britain.

The Irish delegation went to England on the Government Ferry at a then exorbitant 1500 guineas. Collins even claimed for ‘moustache wax’. 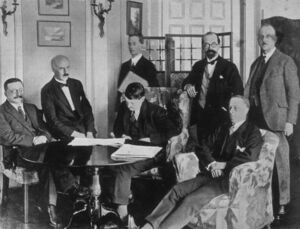 A Day That Shook The World (London Independent)