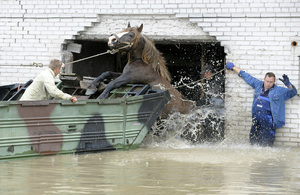 After months of heavy rainfall caused some of the worst floods Europe has seen in decades, farmers help a horse to jump into an amphibious vehicle in flooded Juliszew village in central Poland at Wisla river on May 24, 2010. 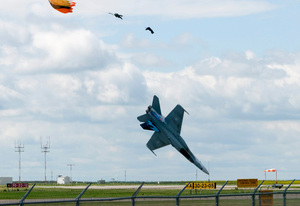 Pilot Capt. Brian Bews parachutes to safety just as his CF-18 fighter jet plummets to the ground during a practice flight at the Lethbridge County Airport for the weekend airshow in Lethbridge, Alberta, Canada on July 23, 2010. 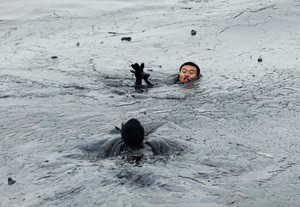 In seawater covered by a thick layer of spilled oil, two Chinese firefighters, Zheng Zhanhong (center) and Han Xiaoxiong (top right) attempt to rescue their fellow firefighter Zhang Liang (only his hand visible) from drowning beneath the oil slick during clean-up operations at the port of Dalian, China on July 20, 2010. Zhang Liang was unable to resurface, and drowned. 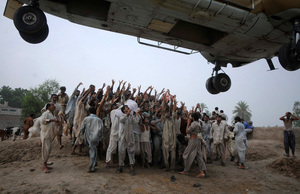 Pakistani villagers raise hands to get food dropped from an army helicopter at a flood-hit area of Kot Addu, in central Pakistan on Saturday, Aug. 7, 2010 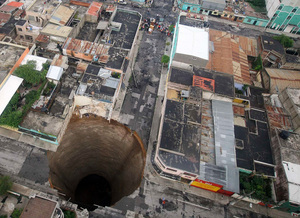 A tremendous sinkhole caused by the heavy rains of Tropical Storm Agatha in Guatemala City was estimated to be 30 meters wide and over 60 meters deep. As the sinkhole formed, it swallowed a clothing factory about three miles from the site of a similar sinkhole three years earlier. The clothing factory had closed only an hour before it plunged into the Earth.

Part two of the Boston Globe’s continuing homage to the year in pictures.

Mark Zuckerberg: He Mattered The Fourth