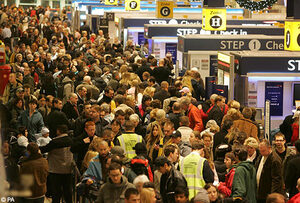 “Hundreds of people tried to run like Olympian hurdlers, leaping over large suitcases and small children in a bid to get ahead of the posse.”

“But the next morning Euston Station was like a war zone. And when the platform was announced for the train to Holyhead, the transformation in the mood was dramatic.”

“It wasn’t long before we were swopping horror stories and having a laugh about how the English would have to ‘bail us out again’.”

“When the announcement came over the tannoy that they had decided to take the whole train to Holyhead a cheer went up the likes of which has not been heard since Italia 90.”