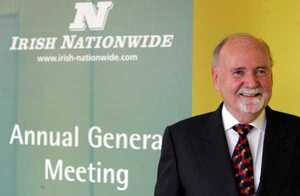 A time when he was his own Santa.

And, according to a newly published report, the Nationwide board were his little elves.

Mr Fingleton enjoyed salary increases of 9.5 per cent a year from 1992 to 2008, and he was entitled to an annual pension of €890,000 based on his final yearly salary of €1.34 million. The report described Mr Fingleton’s €27 million pension fund as “generous”.