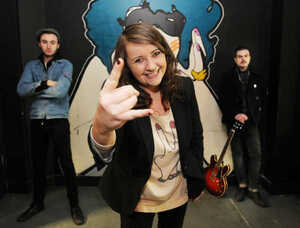 It’s Una Mullally. From the interweb! She still rawks. And it’s an ironic horn sign not meant literally.

But try telling that to Indie funsters Shane Kinsella and Mark Austin from The Minutes. Too hipstery for the horn? They’ll learn

Ceol Ar An Immeal means music from the edge. So expect a man in a hat making his  guitar sound like a helicopter.