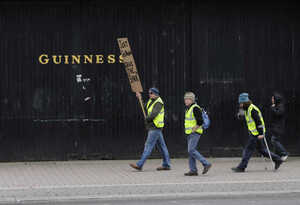 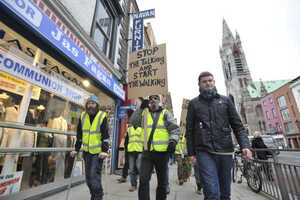 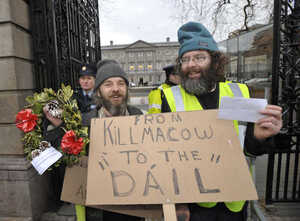 The protest, to highlight the lack of job prospects for young people, took nine days to complete. The eight men from Kilmacow, Co Kilkenny arived at the gates of Leinster House this afternoon.

Their demands included a halving of the number of TDs along with their wages, the abolition of the Seanad, social welfare for the self employed and the right to vote for Irish emigrants.

One of the protestors, Stephen Tobin, arrived at the gates of Leinster House on crutches after hurting himself yesterday.

“I got shin splints and just went through six or seven miles on crutches yesterday evening and the same all of this morning” he said.

Despite his injury getting worse all the time, Mr Tobin said that “it was well worth every bit of it” and that he never thought of stopping.

The men, who ranged in age between 34 and 64, carried signs bearing the slogans “stop the talking and start the walking” and “our children are not for export”.

Spokesman for the group John Kavanagh said at the gates:

“I hope that God will forgive Fianna Fáil and the Green coalition because the men from Kilkenny won’t.”