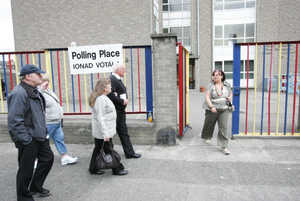 In the past two years many people – nice, sensible, middle class people – have come up to me and asked: “You are great. Why don’t you run for the Dail?”

So many people, in fact, that I contacted other serious thinkers in the media: Eamon Dunphy, Shane Ross, David McDreamy and Constance Gurglekiev, to see if they too had been approached by people on the streets. They had.

We all agreed that it was our moral obligation to stand as independents and increase our profiles. Our plan was to form a new political party, Indecisively Now, that would end cronyism forever and shift loads of books.

My two recent bestsellers ‘Guess What Rhymes With Wanker?’ and ‘Follow My Money’ provided the manifesto for this new grouping.

Sadly, when we met, as we were dividing up our roles, Dunphy observed: “We look like a bunch of cronies.” He was right. The meeting ended in disarray.

I know I will be accused of chickening out, of literally being unable to sacrifice my time or energies on ideals I hold dear.

But this isn’t a time for glorious gestures. It it a moment for lame excuses wrapped up in a ball of pretentious twaddle.

I’m sure that the decision not to lead people on with false hopes is the cowardly one but seriously you can’t trust anyone these days. Which happens to be the title of my next bestseller.