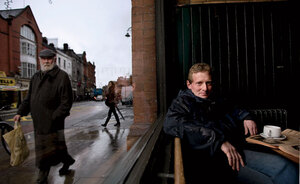 Economist Morgan Kelly as he appears in that 15-page Vanity Fair spread on Ireland. Photographed in Hogan’s on George’s Street, Dublin, with a strategically-placed cup of tea, and an expression that says: “I told you so.”

We’ve been banging on about the article for days but it really is a rollicking read that should smack your gob.

Among many astute observations collected by the author Michael Lewis is this one, concerning the Irish alpha male:

“Ireland’s financial disaster shared some things with Iceland’s. It was created by the sort of men who ignore their wives’ suggestions that maybe they should stop and ask for directions.