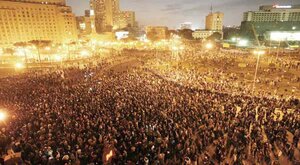 Paul Mason, economics editor of BBC 2’s Newsnight, was asked to try and explain the social dynamic at play behind the unrest in Egypt, Tunisia, Yemen, the mobilisation of student protests in the UK and even the response in Ireland to austerity measures.

“At the heart of it all,” he writes, “are young people, obviously; students; westernised; secularised. They use social media – as the mainstream media has now woken up to – but this obsession with reporting ‘they use Twitter’ is missing the point of what they use it for.”

1. At the heart if it all is a new sociological type: the graduate with no future

2. …with access to social media, such as Facebook, Twitter and Yfrog, they can express themselves in a variety of situations ranging from parliamentary democracy to tyrrany.

4. They are not prone to traditional and endemic ideologies: Labourism, Islamism, Fianna Fail Catholicism etc… in fact hermetic ideologies of all forms are rejected.

5. Women very numerous as the backbone of movements. After 20 years of modernised labour markets and higher-education access the “archetypal” protest leader, organiser, facilitator, spokesperson now is an educated young woman.

6. Horizontalism has become endemic because technology makes it easy: it kills vertical hierarchies spontaneously, whereas before – and the quintessential experience of the 20th century – was the killing of dissent within movements, the channeling of movements and their bureaucratisaton.

7. Memes: “A meme acts as a unit for carrying cultural ideas symbols or practices, which can be transmitted from one mind to another through writing, speech, gestures, rituals or other imitable phenomena. Supporters of the concept regard memes as cultural analogues to genes, in that they self-replicate, mutate and respond to selective pressures.”(Wikipedia) – so what happens is that ideas arise, are very quickly “market tested” and either take off, bubble under, insinuate themselves or if they are deemed no good they disappear. Ideas self-replicate like genes. Prior to the internet this theory (see Richard Dawkins, 1976) seemed an over-statement but you can now clearly trace the evolution of memes.

8. They all seem to know each other: not only is the network more powerful than the hierarchy – but the ad-hoc network has become easier to form. So if you “follow” somebody from the UCL occupation on Twitter, as I have done, you can easily run into a radical blogger from Egypt, or a lecturer in peaceful resistance in California who mainly does work on Burma so then there are the Burmese tweets to follow. During the early 20th century people would ride hanging on the undersides of train carriages across borders just to make links like these.

9. The specifics of economic failure: the rise of mass access to university-level education is a given. Maybe soon even 50% in higher education will be not enough. In most of the world this is being funded by personal indebtedess – so people are making a rational judgement to go into debt so they will be better paid later. However the prospect of ten years of fiscal retrenchment in some countries means they now know they will be poorer than their parents. And the effect has been like throwing a light switch; the prosperity story is replaced with the doom story, even if for individuals reality will be more complex, and not as bad as they expect.

10. This evaporation of a promise is compounded in the more repressive societies and emerging markets because – even where you get rapid economic growth – it cannot absorb the demographic bulge of young people fast enough to deliver rising living standards for enough of them.

To amplify: I can’t find the quote but one of the historians of the French Revolution of 1789 wrote that it was not the product of poor people but of poor lawyers. You can have political/economic setups that disappoint the poor for generations – but if lawyers, teachers and doctors are sitting in their garrets freezing and starving you get revolution. Now, in their garrets, they have a laptop and broadband connection.

For 10 more reasons and some complications to these points read on at Paul Mason’s blog here and follow him on Twitter.