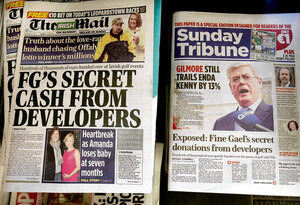 The Sunday Tribune is to pursue legal action in response to the Irish Mail on Sunday’s publication yesterday of thousands of newspapers featuring a mocked-up Tribune masthead.

The Mail has been widely criticised for the move, which came as publication of the Tribune was halted due to the appointment of a receiver to the title, putting 43 jobs under threat.

Described by the Mail as a “marketing exercise”, the move saw around 25,000 ‘special editions’ of the Mail being distributed to news outlets mainly in the east of the country yesterday.

The National Consumer Agency (NCA) this morning confirmed it is also considering prosecuting the Mail for a breach of the Consumer Protection Act.