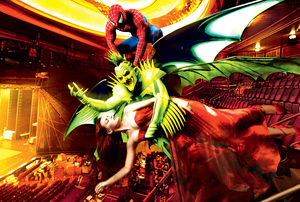 Spider-Man the Musical was meant to open on Broadway on Monday night. It didn’t (it will now open on march 15). Sadly, it didn’t stop the critics from going along to have a look.

“Spider-Man” is not only the most expensive musical ever to hit Broadway; it may also rank among the worst… From what I saw on Saturday night, “Spider-Man” is so grievously broken in every respect that it is beyond repair.

The failure rests squarely on [Julie] Taymor’s run-amok direction. This is, after all, her vision, and it’s a vision that has been indulged with too many resources, artistic and financial… The investors of “Spider-Man” have inadvertently bankrolled an artistic form of megalomania. The book, by Taymor and Glen Berger, is an absolute farrago, setting up layers and subplots before the main narrative line has been established.

Neither Taymor nor her co-writer, Glen Berger, have found a way to improve the book, a protofeminist stew that foolishly decants the myth of the weaver Arachne into a story that’s incoherent to begin with.

More dispiriting is the music… [Bono and the Edge] transformed their sound into stock Broadway schlock pop—sentimental wailing from the early Andrew Lloyd Webber playbook, winceable lyrics and the kind of thumpa-thumpa music that passes for suspense in action flicks.

But it’s not all bad:

Give a kidney to go see ‘Spider-Man.’ I’m telling you, mark my words, it’s being panned right now, nobody’s saying good stuff about it. I’m telling you, you go buy your ticket – you buy your ticket now, if you’re thinking about coming to New York, because when this thing opens and it’s starting to run, you will not be able to get tickets to this for a year. This is one of those shows, this is the ‘Phantom’ of the 21st century. This is history of Broadway being made. I sat next to the casting director, by chance, and I said, ‘You, sir, are part of history.’