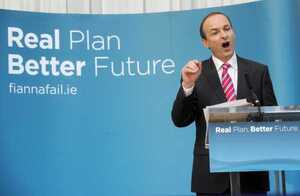 AN ELECTION manifesto with no new spending commitments and no gimmicks was how Fianna Fáil leader Micheál Martin described his party’s programme launched yesterday. Mr Martin said it fulfilled his commitment to a new kind of campaign from Fianna Fáil and a new politics for Ireland.

NEW Fianna Fail leader Micheal Martin and the six remaining cabinet ministers will be paid almost €90,000 in severance payments over the next two years, even though they plan to continue as TDs. They will get these payments to ‘compensate’ them for loss of ministerial salaries.

Mr Martin confirmed he will not give up these pay-ments, which Fine Gael leader Enda Kenny has promised to abolish for future ministers.

Martin Plan Backfires As He Clings To €90,000 Deal (Irish Independent)

Warning! Pushy Strangers In The Mirror May Be Closer Than They Appear

You Have Seen Those David Quinn Tweets Haven’t You?