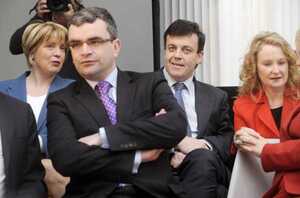 THE outgoing Government has spent more than two years defending its decision to guarantee the entire liabilities of the Irish banking system on that infamous night in September 2008.

But as that debate raged on last year, a decision was made to guarantee another whack of bank cash, this time the billions of emergency liquidity assistance (ELA) being channelled into Irish banks by the Central Bank of Ireland.

Between August 27 and December 31 last year, the amount of ELA sanctioned by our Central Bank surged from €14.4bn to just over €51bn — with every last cent explicitly guaranteed by the Irish taxpayer.

The development sees masses of risk transfer from the European Central Bank and the euro area en masse to the ordinary Irish worker and the State in general.

Relax. We’re good for it.