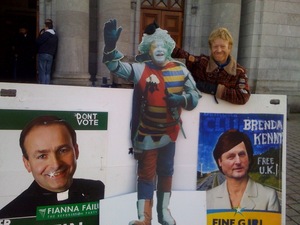 “Mark O’Broin from Glasheen was removed from Cork City Hall by Gardai and, he claims, Fianna Fáil party members, for what he says was a peaceful protest [attempting to bring his mocked-up posters bring into the count centre] and “a bit of craic.”

Me And Karl In The Office Last Night

You Want My Number One?

Is The Yellow Morph Guy A Marketing Tool?