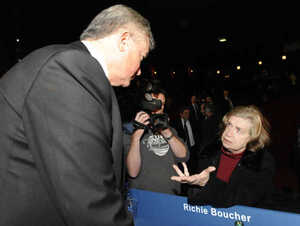 Let us consider the following:

Lenihan told the Dáil in December that the bank – which has received €3.5 billion from the Government and is 36 per cent State-owned – paid no performance-related bonuses for 2009.

In fact, the bank paid more than €66 million in bonuses from September 2008 to December 2010, the department’s inquiry found.

So Bank of Ireland boss Richie (picture above, after stealing that lady’s dentures) and his team gave the government the wrong steer. No biggie, we’re used to this sort of stuff.  So what do they suggest as compensation?

A few sackings? A public statement of remorse?