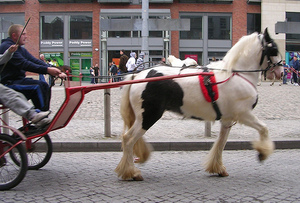 64-year-old Patrick Loughran of Swords in Co Dublin claimed he was walking in the Smithfield Market area on 3 February 2008 when he was hit by a horse and a type of small carriage called a sulky, being driven at speed by an unknown person.

He said he was struck by the horse, and thrown over a bollard causing severe personal injuries to his left shoulder, neck and back.

He says the horse also stood on his foot.