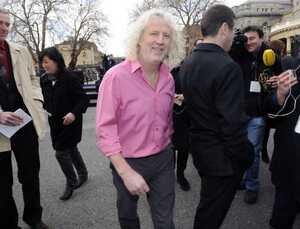 Joe Duffy: “Now apparently the dress code is that you should wear a jacket, whatever about an open-neck shirt. Did anyone say anything to you about not wearing a jacket?”

Wallace: “Well, yeah, I mean, they told us that they would like us to wear a jacket but I don’t really wear jackets, Joe, much.”

Duffy: “Who told you they would like you to wear a jacket?”

Wallace: “Ah, I don’t know the names of the people in there, Joe, yet, em, but em, you know, we were told that it was common procedure. But I don’t, I don’t wear jackets inside, and I mean I rarely even wear them outside, bar if it’s actually raining, so I don’t really see much point and eh. But that’s just, you know, me. But it’s just, I mean, if people want to wear jackets I don’t have a problem with it either…”

Listener John O’Donovan in Cork: “We’ll have to differ as regards the dress code. If you want to be taken seriously you should dress like everybody else. I would like to see you the next time on Oireachtas report wearing a shirt and tie and I’d say you would look very well.”

“Let me tell you something John. There were 13 and a half thousand people in Wexford voted for me and I can tell you that the vast majority of them would much rather see Mick Wallace change politics than politics change Mick Wallace.”

Wallace: “Have I ever worn a suit? Yes. I wore a suit five times in my life. The last time was 30 years ago at my father’s funeral and I never wore a suit again… I accepted the convention at the time, which I don’t do now.”