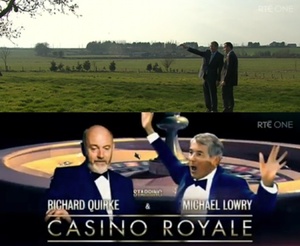 A replica White House, a concert venue bigger than the 02 and 20,000 visitors a week.

As Richard’s son Andy might put it. Here’s a flava:

“If a Chinaman came in, or some other man came in, and said he was going to give 2,000 jobs to the area here, there wouldn’t be a word about casinos, a word about anything else. We’d meet him with a red carpet and open arms and we’d say, ‘Don’t leave Thurles, we want those jobs’.”

Michael Lowry, on why Richard Quirke has not made himself available for interview.

“My understanding is that, to keep a casino of that scale open, you would need approximately 20,000 visitors a week. So the logistics of getting 20,000 people in and out of Two-Mile-Borris on a weekly basis, I would suggest, would be ambitious at the very least.”

“I would much prefer if somebody with, I suppose, less baggagge in the public domain were championing our cause, yeah… We do want our reputation to be restored and you want, I suppose, people who have obvious integrity, at least in the perception of integrity.”

Hickson, on Lowry’s association with the plan: