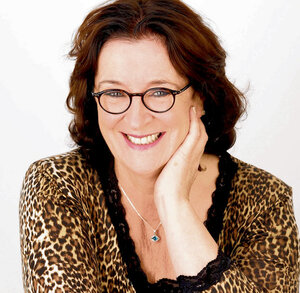 Marie Louise O’Donnell talked to Pat Kenny on the wireless about the Dame’s homecoming. It was a feast of blarney.

“I knew I was in the west because I got a seat up in the balcony, because looking down on the sea of people you had that kind of whiff and hue and haze of the west of Ireland. You know the smell of turf and porridge and tweed and prayer and the clothes and the jackets and the huge mass of people and the kind of hue of them, like you get at a big country mass all standing around ready for Enda to come in.”

“And there were the grand old men of the west and well-dressed women and aunts and uncles and children and cousins and sisters and lawyers and farmers and shopkeepers and footballers. Immigrants! Managers, milkmen and butchers. What you’d call I suppose paupers, princes and a few pirates …

“And you know you were in the west as well… From an aerial view and you’re looking down at the faces. They have great, wonderful, wide faces and sparkly eyes and thick wiry hair, and kind of big ears. Bright dancing eyes.”

Later she denied being in love with his bright dancing eyes.

“I respect Enda and I trust him. I’m not in love with Enda. Enda is happily married… One of the things about him, you know, there is a certain intelligence and stamina and an energy and a physicality because you know he stood for about five hours Pat. He never sat down. He shook every hand in the room because he promised he would…”

Later, to Broadsheet, she added: “Come a-running? I’m no woman to be honked at and come a-runnin'” and added: “It’s more than talk you’ll be gettin’ if you step a step closer to me!”