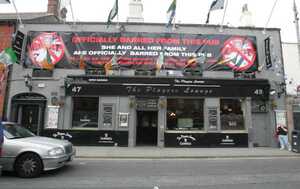 Or you’ll lose your late licences.

“Mr Stokes, the father of Celtic footballer Anthony Stokes, said he reluctantly agreed to take down the controversial sign after a senior garda threatened to object to his application for six late licences.”

Hang on is that even legal. What’s his banner got to do with licences.

Insp Liam Dillon told the court his objection, based on public safety concerns, would be withdrawn if the banner was removed by 5pm.”

Previously: The Queen Of England Is Officially Barred From The Player’s Lounge, Fairview.