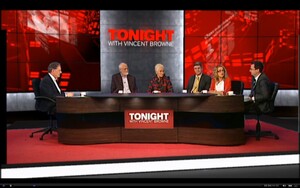 Terry Prone: “I find it fascinating that no psychiatrist that I know has ever set out to study happy people. It’s as if happiness were the ultimate aberration, and I can’t understand that.”

Vincent Browne: “Who are happy people? Are they Americans or something, are they?”

Prone: “No, they’re people who actually get a kick out of life and other people and who have all of these pathologies as well but who get on with it and enjoy stuff.”

Prone: “To be a recluse is not acceptable now. You must be socialised from the moment you go into a bloody creche.”

Browne: “How do you know it’s not acceptable to be a recluse?”

Prone: “I have no social life. I don’t go to parties. I hate people.”

Browne: “You can’t turn on the radio or the television but you’re on it.”

Browne: “That’s not a recluse. You’re on the bloody airwaves all the time. What are you talking about?”

Prone: “Oh well, yes it is, if you go home afterwards and you live virtually on your own except for a husband who watches sport.”

Later, talking about organised religion and spirituality and the mystics’ message of love…

Ivor Browne: [They] are saying the same thing and that is about a message of love, that there is love actually coming from the source.

Vincent Browne: “But what source? Again this use of love I think is a bit dangerous. Why can’t we just say that we want to treat people equally and with respect and just that’s enough?”

Terry Prone: “It’s not as much fun as actually loving people. You know, this respect thing is for strangers but loving people is a bit more enthusiastic than that.”

Vincent Browne: “I’ve never been to Shanghai and I don’t know if I’ve ever met anybody from Shanghai, so I don’t love a lot of people in Shanghai.”

Prone: “Exactly. They’re strangers to you. But you have loved a lot of people Vincent. Let’s not go into how many people you have loved.”

Vincent Browne: Well, I have loved a lot of people. Have you?

Ivor Browne: “I have a Chinese couple who come to me once a week. I find them just as human and -”

Vincent Browne: “Oh I’m not saying… I’m just talking about Shanghai. I’m not saying the Chinese are not lovable people. No no no. I just don’t know people in Shanghai. That’s all.” 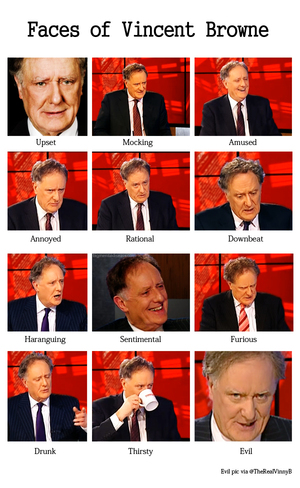